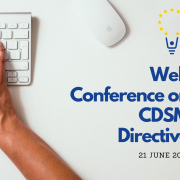 We recently held The Implementation of the CDSM Directive: Snapshots into the Future of the EU Copyright Law Conference digitally on the 21st of June 2021 from 14:00 to 19:00 CEST. At this conference, interim results of research conducted by ReCreating Europe partners were discussed. The event coincided with ReCreating Europe’s cross-disciplinary and transnational research activities, specifically, the implementation of the DSM Directive.

The event commenced with two introductory keynotes by Raquel Xalabarder, Professor of Intellectual Property at Universitat Oberta de Catalunya, and Maciej Szpunar, First Advocate General at the Court of Justice of the European Union.

During the first keynote speech – ‘The aftermath of CDMSD: where do we stand, where shall we go?’ – Raquel Xalabarder shared her thoughts on the CDSM Directive and its wanting implementation process, emphasising the key role of CJEU in the harmonisation of copyright in the EU. She highlighted some ‘good news’ within the Directive – the new mandatory exceptions, new rules on copyright contract law, and the de facto ‘choice-of-law’ rule overcoming territoriality in copyright. Moreover, she went on to warn of the risks of ‘bad laws’ that might stem from this, such as an overly restrictive and market-oriented interpretation of the digital teaching exception and the complex nature of Art.17.

During the second keynote speech, Maciej Szpunar, First Advocate General at the Court of Justice of the European Union, addressed the following question: “The future of EU copyright harmonization: which role for the CJEU?”. He shared his remarks on the challenge faced by the CJEU in assessing what should be decided by the legislator, and what the Court can express when it comes to digital technologies and digital markets. Considering recent CJEU judgements, he highlighted the centrality of the question of how to reconcile the need for effective copyright enforcement and the need for allowing the Internet to work smoothly, without hindering or disincentivising the activity of intermediaries and users. From a legal and copyright perspective, the Internet has been disruptive in many ways. For example, by enabling every demand to meet every supply, it has deeply challenged the notion of territoriality and international private law in general. According to AG Szpunar, the CJEU is looking closely into the modalities of the violation of copyrights and sui generis rights (e.g., in CV-Online Latvia) and into the way users operate online (as in Mircom International).

These two keynotes were then followed by an intermezzo, during which Martin Kretschmer, Professor and Director, CREATe at the University of Glasgow, and Paul Keller, President at Communia, presented two tools used to obtain quality information about the evolution of EU copyright law: the CDSMD implementation tracker, and the new copyrightexceptions.eu web tool.

Four panel sessions followed, in which speakers presented the results of ReCreating Europe’s research. Discussants expressed their views on the research and ways to move forward. Each represented different stakeholder categories, from legal experts to policymakers and civil society.

Panel 1 focused on remuneration and reversion rights. Rebecca Giblin, Associate Professor, University of Melbourne and Director, IP Research Institute of Australia (IPRIA), chaired the panel. This session began with a presentation by Ula Furgal, Research Fellow, CREATe at the University of Glasgow, on the implementation of Art.21 CDSMD, the ‘use it or lose it’ logic underlying the right of revocation and the related legal mapping conducted across Europe. Thereafter, Joost Poort, Associate Professor and Vice-Director, IViR University of Amsterdam, presented on the evolving creators and performing artists’ perspectives on copyright and digitisation as well as the upcoming ReCreating Europe survey on this issue.

Eanna Casey, Chairman of the Board, Societies’ Council for the Collective Management of Performers’ Rights (SCARP) highlighted the key importance of Art.18, acknowledging the need for protection and just remuneration to artists and performers, the risk of its fragmented implementation, and the missing effort by representation organisations to tackle more comprehensively other provisions relevant to artists and performers.

Cecile Deniard, Vice-President of ATLF and its representative with the European Council of Literary Translators’ Associations (CEATL) stressed the ‘creator-friendly’ nature of the final version of CDSMD which recognises their weaker position in the market. Moreover, CEATL ran a flash survey to their members, finding a lack of awareness and transparency with regard to EU copyright reform processes. For good implementation of Art.18 CDSM, transparency and collective bargaining are key to achieve fair and proportionate remuneration to individual authors and artists. The right of revocation is not a goal itself for creators, but rather a last-resort measure, with practicality still in question.

Panel 2 focused on copyright exceptions and limitations and was chaired by Christophe Geiger, Professor of Law, CEIPI University of Strasbourg. Caterina Sganga and Thomas Margoni, Research Professor at KU Leuven and Fellow at CREATe, presented on the legal mapping of EU copyright flexibilities (that has been ongoing within the framework of ReCreating Europe and will be made available in the form of an encompassing public database by the end of 2022) and, more specifically, on the assessment of the new text and data mining (TDM) exceptions. Thereafter, Agustin Reyna, Director, Legal and Economic Affairs at BEUC advocated a consumer-oriented approach to EU reform. This approach is not quite fully embraced by the EU legislator, even though proposals have been made in the past to elevate exceptions and limitations to user’s rights. Current exceptions could fail to comply with EU consumer law safeguards and remedies.

Jeremy Rollinson, Senior Director of European Government Affairs at Microsoft, highlighted TDM exceptions and praised how provisions significantly improved and expanded their scope in the final draft of the Directive and are now being transposed into national laws mostly by ‘copy-paste’. By and large, Articles 3 and 4 provide much more clarity to users on what they are allowed to do with machine-readable data for research purposes. Microsoft is following this closely. They believe the European Commission took the correct approach on TDM exceptions, supporting the development, among others, of Artificial Intelligence.

In response to the abovementioned presentation, Cédric Manara (Head of Copyright, Google) pointed out that the regulatory scene related to Art.17 CDSM Directive is still very much in flux, and that filtering is just one of the options that platforms have at their disposal to comply with Art.17 of the new Directive. This is also evident in the Guidelines recently released by the European Commission. National parliaments, and national courts, in turn, play a key role at this stage by transposing Art.17 at a political and legal level. The impact of platforms, which will have to implement mechanisms to manage the workflow occurring on them and manage all the sorts of claims (licensing claims, blocking claims, etc.), depends on the national implementations of the Directive as well as on the level of activity of right holders: the extent to which they will bring claims ex Art.17 and requests to the platform will significantly shape the post-CDSM online scenario.

Furthermore, Martin Husovec (Assistant Professor at LSE), focused on the question of fragmentation, suggesting that the CDSM Directive might have actually enhanced the level of fragmentation, rather than fostering harmonisation of the Digital Single Market. Art.17 represents an applicable example in this regard, with a decisive role being played by the CJEU Peterson decision on it.

Panel 4 focused on the preservation of cultural heritage, chaired by Andrea Wallace, Senior Lecturer in Law, University of Exeter. Giulia Dore, Research Fellow, University of Trento, and Marta Iljadica, Lecturer in Law, CREATe at the University of Glasgow, discussed the role and implementation of Art.6 CDSM Directive and the preservation of cultural heritage. They shared the preliminary results of the GLAM survey conducted by ReCreating Europe’s WP5. Serving as a discussant, Ariadna Matas, Policy Advisor at Europeana, spoke of the importance of having a new exception, helping to enhance harmonisation in GLAM sector regulation. However, he also stressed the need to take a more complete and holistic approach to help digitisation processes in cultural preservation. Additionally, Benjamin White, Chair of the Copyright Working Group at LIBER, picked up on the thread of the discussion on Art.6 CDSM Directive and further commented on the empirical data collected by ReCreating Europe. He drew attention to the need to embrace a global perspective over the preservation of cultural goods that particularly looks at approaches towards types of work, formats, and additional limitations to such uses. He asserted that this must assess the steps undertaken by the CDSM Directive as a good European development overall.

The conference concluded with remarks from the host, Caterina Sganga, and a call to explore the work of the project and possibilities to collaborate.

Want to join the discussion?
Feel free to contribute!

Reflections on the ‘State of Exceptions & Limitations: Copyright...
Scroll to top