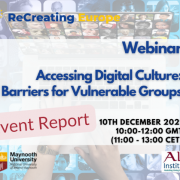 On Friday 10th December 2021 (10AM – 12PM GMT), to coincide with International Human Rights Day, the Maynooth University (MU) reCreating Europe research team organised a webinar entitled ‘Accessing Digital Culture: Barriers for Vulnerable Groups.’ This virtual seminar was hosted by the MU Assisted Living and Learning (ALL) Institute. Two Irish Sign Language (ISL) interpreters provided simultaneous sign language translation, to make the event as accessible as possible. Attendees included legal professionals and academics, members of civil society organisations, and persons from representative organisations of vulnerable groups who were subjects of the research, including key informants who were interviewed as part of the research.

The event aimed to present the research conducted within reCreating Europe by the Maynooth unit. It began with some introductory remarks from Maynooth’s research leads, Noelle Higgins and Delia Ferri, both in the Irish and English language. 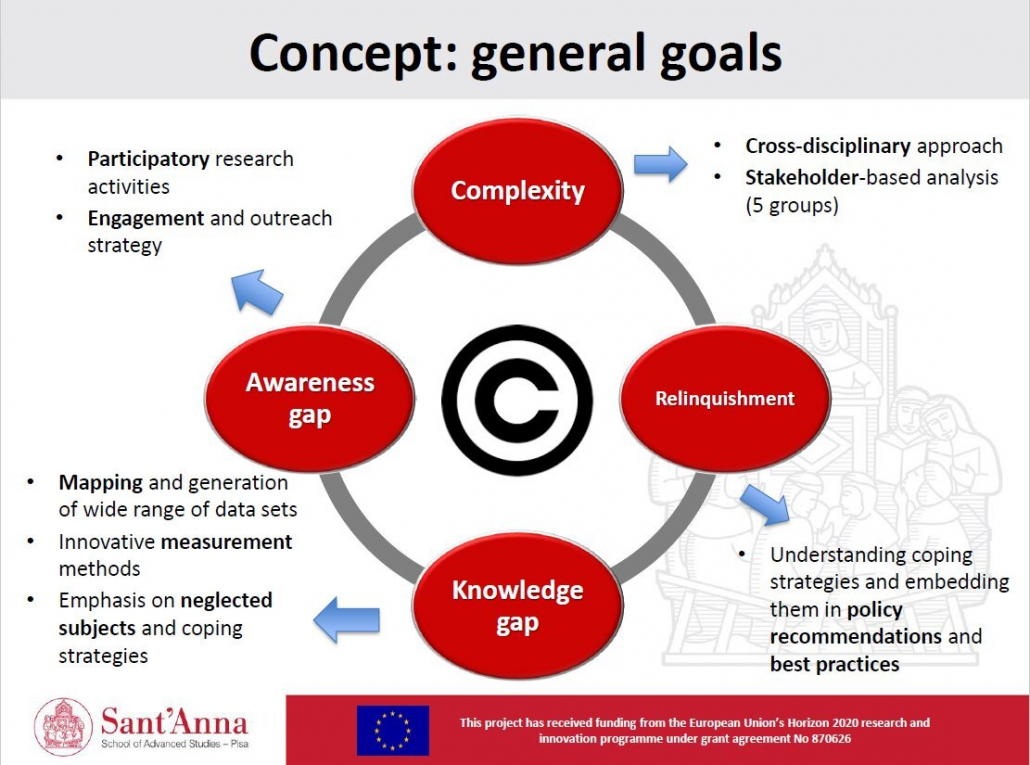 Session 1 of the webinar entailed a general introduction on the reCreating Europe project and access to digital culture by guest speaker and project coordinator, Caterina Sganga (SSSA). Caterina explained how opportunities in terms of access and affordability of cultural products brought about by digitisation are counteracted by the technical and legal obstacles to access created by copyright, which are exacerbated by poor EU harmonisation of copyright exceptions and flexibilities. Fellow guest speaker, Arianna Martinelli (SSSA), outlined the core tenets of Work Package 2 (WP2), which focuses the ongoing work to address the economic, legal and social barriers to access to digital culture for end users, including those defined as vulnerable.

Session 2 focused on the specific research of the MU unit, namely the barriers faced by vulnerable groups in accessing digital culture. Katie Donnellan opened the session with an overview of the objectives, methodology and general preliminary findings of a set of semi-structured interviews from across 12 European countries. Key stakeholders and representatives of organisations representing both old and new Minority Groups and Persons with Disabilities were interviewed by post-doc-researcher Laura Serra about the barriers they encounter in accessing digital culture. Three emerging themes were outlined: 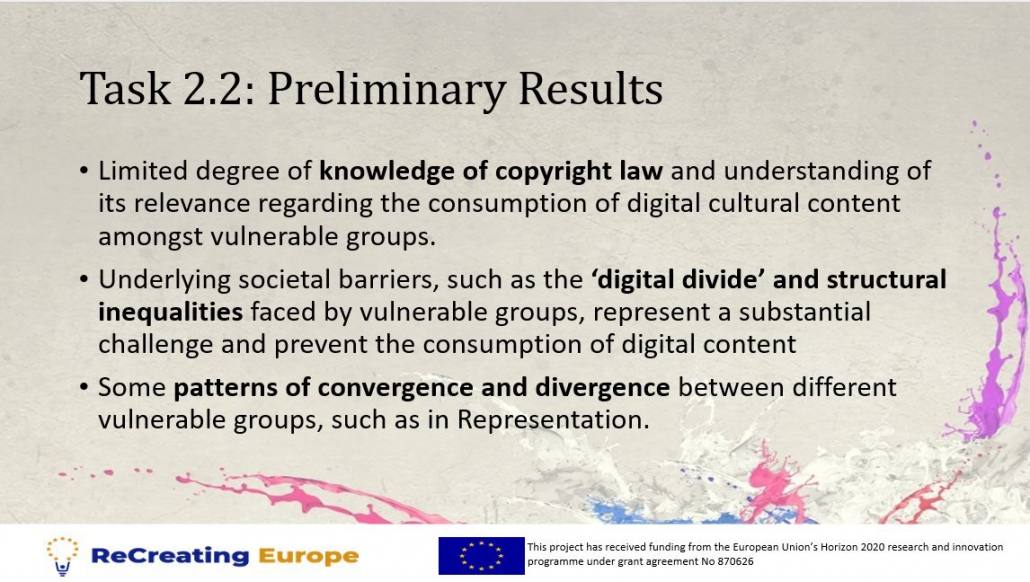 Noelle Higgins followed with a presentation of the issue of minorities and access to digital culture. Noelle outlined the research team’s broad conceptualisation of minority, which encompasses all non-dominant groups in a nation-state, that meet one or more specific criteria: 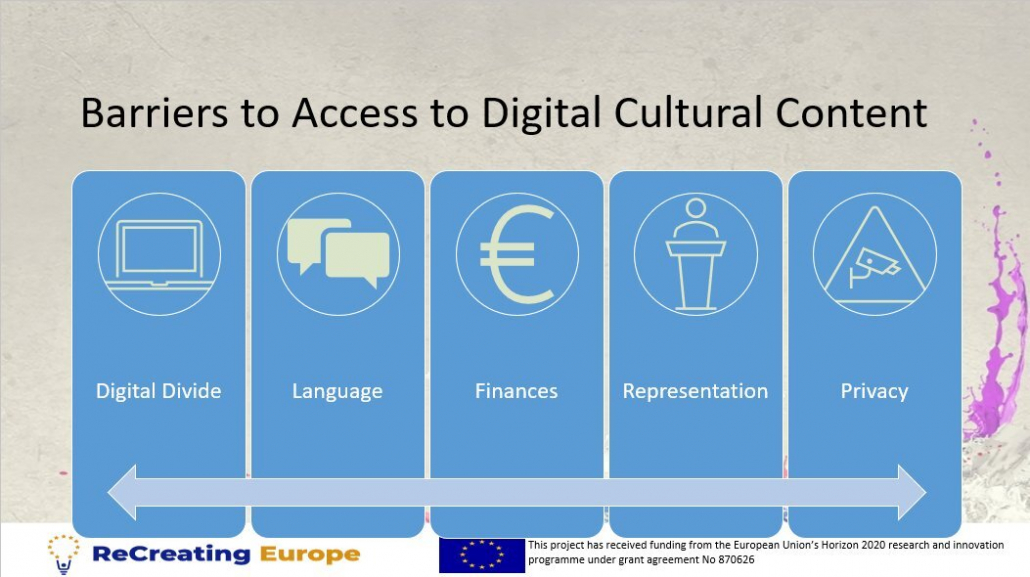 Delia Ferri closed Session 2 with a discussion of persons with disabilities and access to digital culture. Delia presented findings from the data collected from interviews with key informants. She highlighted that organisations of Persons with Disabilities showed a general awareness of how copyright law can hinder access to digital cultural content. Particular attention was paid to the Marrakesh Treaty to Facilitate Access to Published Works for Persons who are Blind, Visually Impaired or Otherwise Print Disabled and of EU Accessibility legislation, both of which were mentioned by interviewees as essential legal instruments, to surmount the barriers to access. 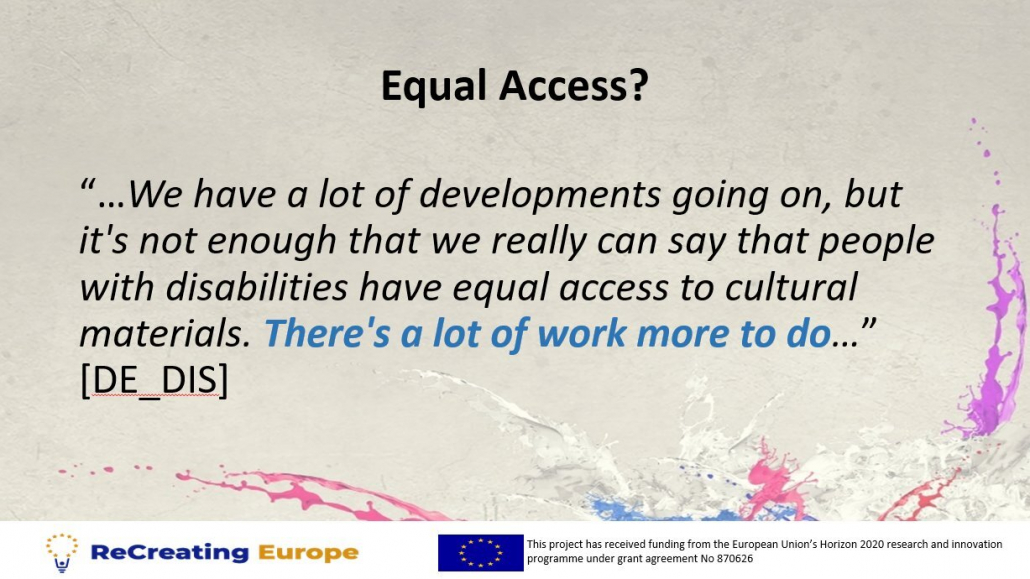 This webinar marked the first of a number of dissemination events and outputs that the MU Research Team intends to host and publish in the New Year, to reflect the ongoing data analysis that they will conduct under the auspices of both Tasks 2.2 on barriers to access experienced by vulnerable groups and 2.5 on the specific case study of persons with visual impairments. This will complement the already completed dissemination outputs, such as an ALL Institute blog post, as well as those which are currently under review for publication, such as academic articles based on the research for the Cultural Trends Journal and the European Intellectual Property Review and an upcoming book chapter on ‘The Right to Culture for Asylum Seekers in Ireland: Lessons to Be Learned for the International Legal System’ in Migration and Culture: Implementation of Cultural Rights of Migrants, edited by G.C.Bruno F.M. Palombino, A. Di Stefano, G.M. Ruotolo.

The event highlighted the positive developments made thus far in terms of accessibility of digital cultural content for vulnerable groups and solidified the need for projects such as reCreating Europe to ramp up the work towards the creation of a truly modern, accessible, inclusive and diverse digital cultural landscape in Europe and beyond.

View the speakers slides on Zenodo.

Want to join the discussion?
Feel free to contribute!

Call For Papers – Workshop on Intellectual Property Rights in Szeged ...
Scroll to top